I am sitting at a very smelly LAN cafe typing this on a computer that runs Windows XP and has a mouse with a tracking ball. Plus side, it’s right next door to my hotel and the sticky keyboard keys encourage me to check all my spelling.

I have just finished a two-day stint in the Artist Alley at Oz Comic-Con. I am exhausted, and I’ve had almost nothing to eat for two days, and not a single moment off, but I have come pretty much straight in here to write down my experiences, for fear that time will dull them.

Because I was by myself at the table, I didn’t get to leave to wander around the convention, but you could see at a glance how overwhelmingly successful the event was. I think the end tally was somewhere in the vicinity of 19,000 visitors over the weekend, more than twice the anticipated number!

I had never seen anything like it before. The costumes were insane and prolific and the rest of the Goyder pavilion was just wall-to-wall geekery. The kind of thing that made me simultaneously sad and somewhat relieved to be confined to my Artist Alley table.

I got to meet a few of my contemporaries over the weekend. I was seated next to a con veteran on one side who was trying to offload some old stock. He was friendly and good-natured, but seemed a little jaded by the whole con experience… at least when compared to my doe-eyed naivete. On the other side was apparently another con virgin, but I’m not exactly sure what he was selling (I am guilty of poor listening), but I think he was attempting to gauge interest in a technology-driven comic. He was away from his table for almost the entire weekend and had only a handful of business cards and a banner to let people know he was there.

The convention staff and volunteers were all extra-friendly folks who were more than happy to help out where needed. For example, I couldn’t leave the table to pursue the autographs I wanted (Ben Browder and Bill Farmer), but all I had to do was notify the relevant volunteers, and they got the autographs on my behalf! I didn’t need any help setting up my stall in Artist’s Alley, but I could see them helping out others at very short notice. And all weekend, I could see them rushing around like mad, working extra hard to deal with the unanticipated flow of customers.

In terms of my own stall, I read the excellent Artist Alley Survival Guide about thirty million times in the last couple of months, and the most excellent advice contained in it was this:

* Don’t sit at your table; stand. You’re more approachable.
* Don’t be mute. Talk to people, ask them how their day’s going.
* As soon as you have their attention, give them something they can hold/flick through while you talk with them.

This advice made me a marketing machine (though once or twice, the “have a look” ploy was misheard as “have a book” and I had to move fast to avoid stock walking away!)

At least half of my sales came from talking to people who obviously had no intention of stopping. My rule of thumb was thus. One second eye contact, or two seconds looking at the table, and I’d say “Hi.” If they looked at me, I’d continue “How is your weekend?” If they smiled/spoke, I’d hold out a copy of The Lesser Evil: “Want to take a look?”

Unbelievably powerful. I feel almost guilty! But no one looked upset or ripped-off; I think they were genuinely pleased to have picked up a decent quality graphic novel for $8… something I guess doesn’t happen too often around these parts.

It was quite an exhilarating day. I found myself watching people intensely as they picked up The Lesser Evil curiously, turned it over, flicked through it, raised their eyebrows, murmured wonderful things like “Wow, that looks good” and then decided to take a chance. When I noticed myself staring, I tried to cut it down a little, but I have to admit, it was pretty cool watching complete strangers come over to check out my work.

One fellow took a brochure early in the day, read through it at some point while standing in line elsewhere, came back to my stall and told me that he was thoroughly intrigued by what I’d written in the brochure. He walked away with two books under his arm!

Another man bought a book from me, read part of it while in line elsewhere and came back specifically to tell me that he had greatly enjoyed what he had read so far. Brushing praise aside and shooting for the moon, I shamelessly sold him a copy of The Lesser Evil Volume 2.

One interesting thing is that people tended to assume that my book must be self-published (a natural assumption given that I was there by myself in the booth, pimping a single book). One lady apologised as soon as she’d asked the question; she was so embarrassed, but of course, I laughed it off. It was kind of fun telling people that I’d gotten published the traditional way, and in a sense, the repetition made the truth and the accomplishment that much more real to me. 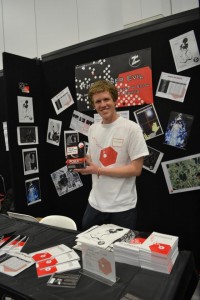 After the first day, I’d sold nearly half of all my books, but almost none of my prints. I spent most of the night tossing and turning over different possibilities and decided in the end that it would be a good idea to start offering the prints as free incentives to purchase (i.e. buy a book, get a print).

The pub I was staying in had a loud band on until about 11 (of course, it was Saturday night, so I don’t really blame them), so I took a walk around the general vicinity. Jesus, Adelaide is beautiful. I want to live here now. For serious.

Day Two: I had a splitting headache from a very poor night’s sleep, but still felt happy, optimistic.

The free print idea went over like Gangbusters (which I have been led to believe is a good thing). In the end I managed to pass off more advertising masquerading as prints, and every single book I had left in stock. It would be near impossible to describe the sheer scope of the triumph I felt when I realised that I was going home with an empty suitcase (I had feared the opposite). It was an incredible feeling, and indescribable.

I was pulled away from my table for ten minutes for a whirlwind reunion/meet with a number of Adelaide Browncoats, and a photo with Jewel Staite. Can’t wait to see the photo, and it was great to catch up with everyone, if only for a moment! Yet another example of the intoxicating positive atmosphere I found myself in.

A girl at the next table was doing ‘draw you as a zombie’ sketches for passersby, and was so busy that she frequently had to turn people away. At the end of the con, she asked if I’d be at the next Oz Comic-Con in Melbourne in June/July. Of course, I can’t make it as Katie is due to give birth to little Liam around that time…

… but at some point during that conversation, it dawned on me just how charmed a life I am leading. I’m twenty-six, but I already have a wife and one-point-five children, a house, a mortgage, and a solid foothold into my lifelong dream via a published book that I can promote, sell and bask in. I have financial security sufficient to make a trip like this one to Adelaide feasible, but not so much as to eliminate the thrill of risk from the venture. Everything about my life just felt so right at that moment, and I hope that I will remember it forever.

I really am very lucky.

On the way to Adelaide, I had a panic attack (a real panic attack – I’ve never had one before. It was damn scary). All I could foresee was doom and gloom for this trip, for my writing career in general, and with the appropriate consequences for my overall happiness in general. I wanted Katie to help me, I wanted to be home, I wished I’d never even written the book to begin with…

But now I’m glad I went. Even though my theshold for success was low (don’t fail miserably), I think this was an important rite of passage for me. A professional challenge that put me well outside my comfort zone, stripped me of all familiar buffers (Canberra and Katie, mainly) and threw me out into the lion’s den, to sink or swim (mixed metaphor). It was a big risk, financially and professionally, and placed additional burdens on my family that I regret, but overall I am very proud of myself for going to Oz Comic-Con and I am even prouder that I managed to succeed at selling 110 copies of my book to a large number of complete strangers.

I even took pre-orders for the unreleased Volume 3!

Incredibly touched and inspired by the events of this weekend, I’m feeling a new confidence in myself, and in my writing.

People are reading my work.
People actually want to read it.
People want to spend money on it (and even at a convention where they have already spent their year’s worth of fun money!).

[Sorry to everyone I know who’s already bought a copy, but if I’m being honest, I have never been able to shake the feeling that you bought my book out of obligation (I truly love you for your devotion, by the way).]

Even though financially, I don’t think I even reached the break-even stage (though it was a close call), I consider Oz Comic-Con Adelaide to be a resounding success for me (possibly even as much for me as it was for itself!)

TL;DR: I am happy, and feel like as far as my writing career is concerned, the sky is the limit! I’m not stopping. Ever.

PS: There might be photos. I didn’t have a camera, but several folks photographed me and promised to send me copies via email!