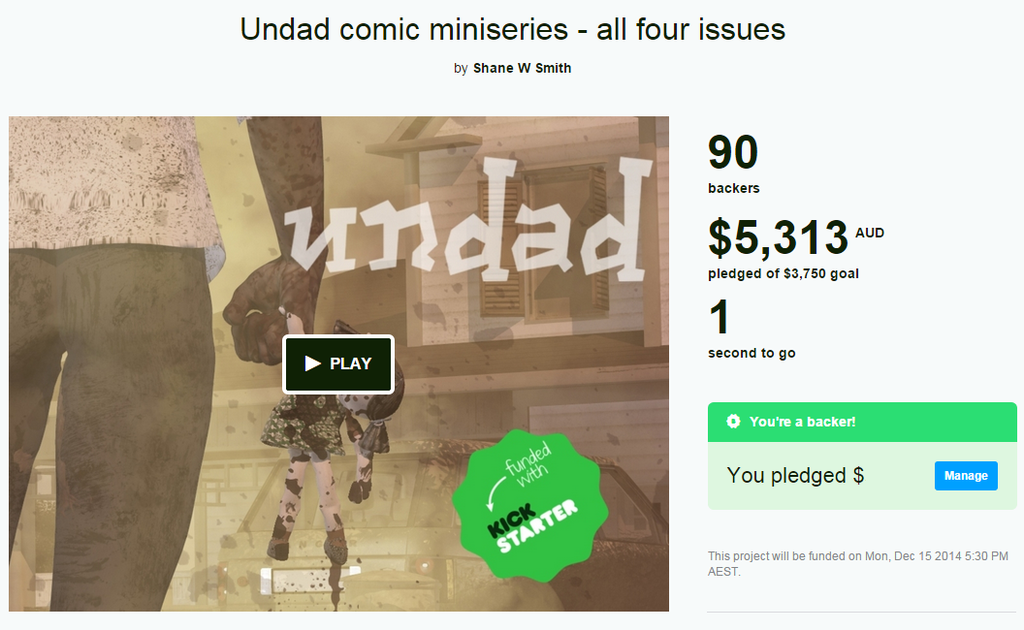 Earlier this week, my Kickstarter campaign Undad ended, raising more than $5300, which is 40% more than its funding goal of $3750.

In this post, I’ll attempt to break down some of the numbers, using charts and data from a number of sources (including calculations of my own), and show where the money came from. This piece will appeal to those among you with a fetish for statistics.

It’s not much of a secret that the majority of Kickstarter backers for small projects are the friends and family of the creator. It’s not something that Kickstarter advertises, but it’s definitely a known thing.
This was particularly the case with Undad, with only 8.2% of pledged money coming from people that I did not know personally.

Therefore, when analysing any of the data in this document, it’s important to remember that this was (despite my efforts to attract a larger audience) a project that was almost entirely Friendfunded.

It’s therefore not particularly surprising, then, that most of the pledges were not referred by Kickstarter.


Breaking these down in a little more detail, it’s plain to see that Facebook and kotaku.com.au (a site where I interact directly with a large proportion of my friendship base) were tremendously lucrative, in terms of Undad funding. 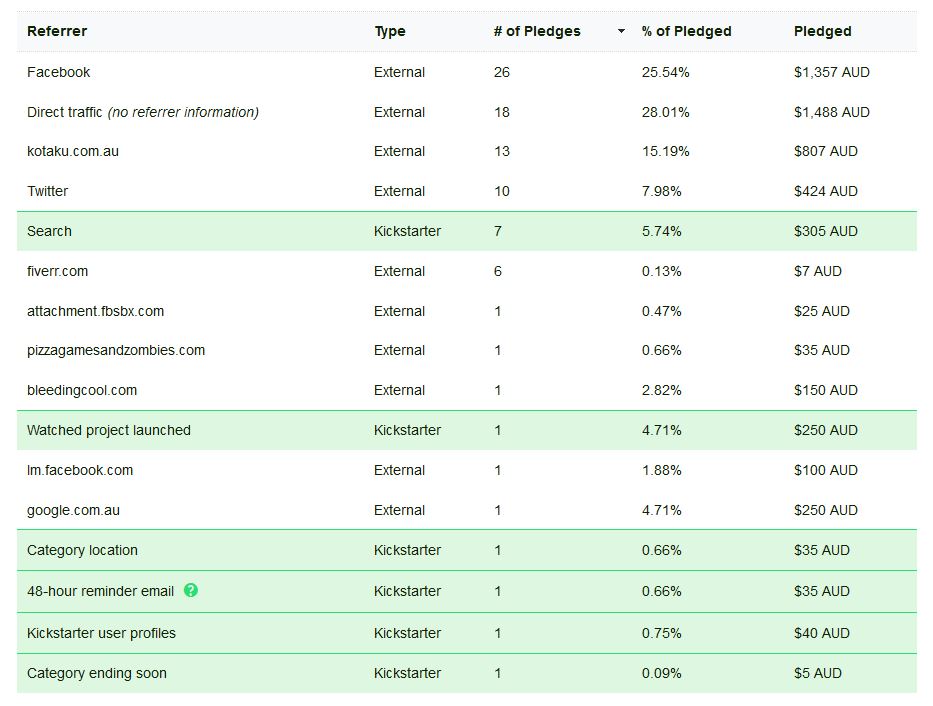 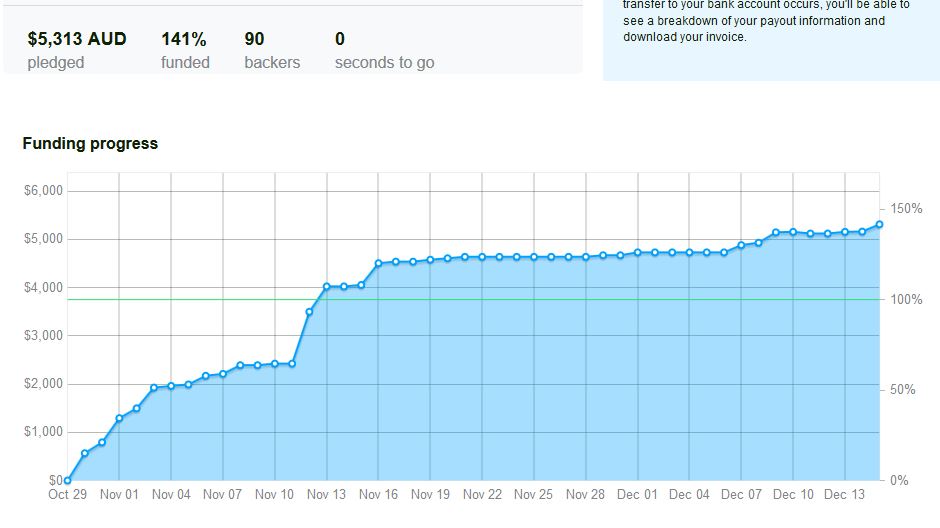 See that two-day $1000+ spike at around 11 November that pushed Undad over its goal? That’s when I approached friends directly using Facebook PMs. Although it’s true that I have a particularly awesome collection of friends, there is something undeniably powerful about approaching people one-on-one and asking for money. Makes me wonder just how well the cold approach of those charity workers and/or boozehounds in city centres must work.

This chart shows that funding slowed down dramatically after Undad reached its goals. The reason for this may be twofold:


There was a further slight lift towards the end there, when I announced that the stretch goals would be going ahead, and people could upgrade their pledge by a minimal amount to effectively double the amount of content they would be receiving. This had a very high take-up rate.

It’s very clear to see that Undad received almost all of its funding very early on. This, I imagine, would be fairly typical for projects that have a high proportion of friend involvement. Still, it makes for a fairly amusing looking rapid downgrade in projected funding trendlines: 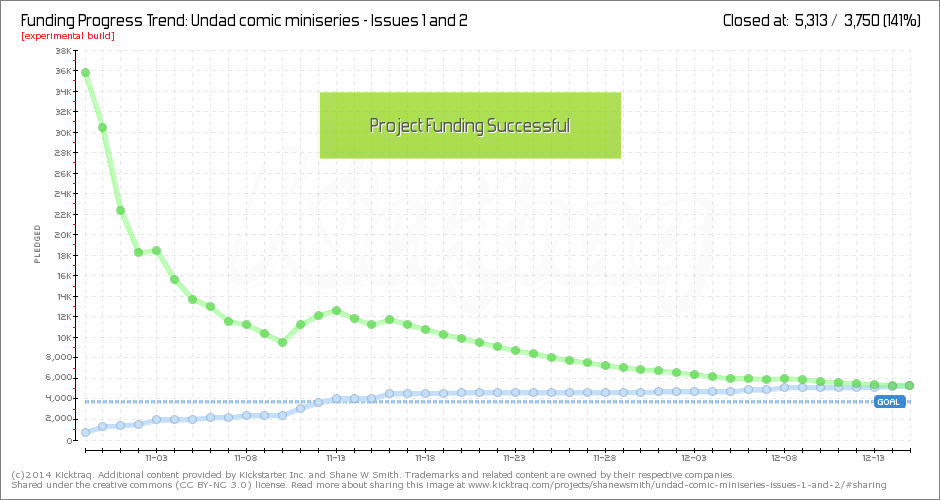 Views are a hard thing to quantify. Kickstarter doesn’t have any direct stats available to contributors that tell us how often our campaign page was visited. What they do have is a record of the number of project video views.

Undad was seen or featured in a number of places during the campaign. But as I’ve already demonstrated, the vast majority of pledges came from people I already know. So the primary benefit of all this promotion is, at best, one of exposure, and attempting to quantify views is therefore ultimately pointless. 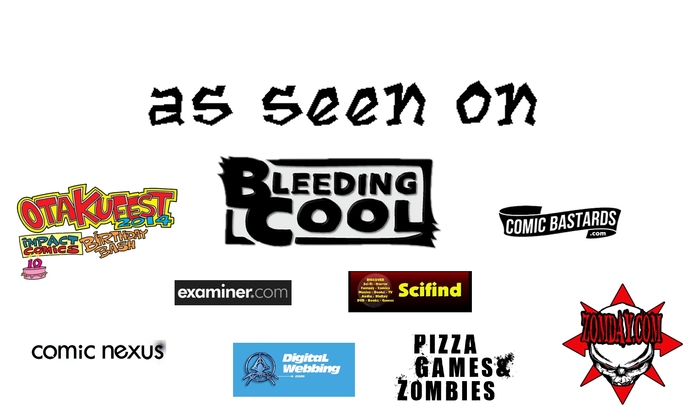 Suffice to say that (assuming the project itself was of sufficient quality to otherwise attract backers, which might be a long bow to draw) Undad failed to achieve the threshold of views, or the right kind of views, for it to achieve success on its own. 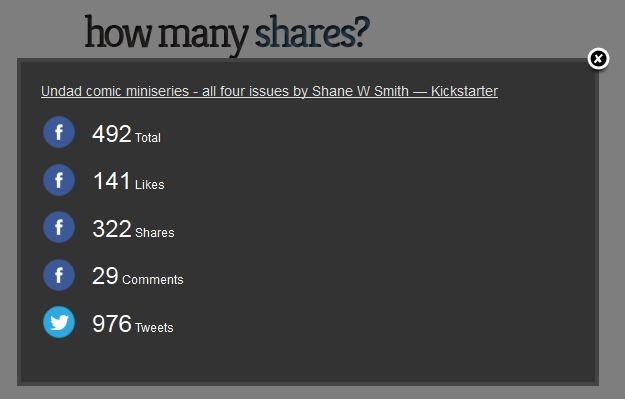 There seems to be a growing fatigue towards Kickstarter projects, particularly in light of recent very public failures of high-profile projects. Kickstarter did amend their ToU for creators in October 2014, but it might be a case of too-little-too-late for those folks who are hoping to use Kickstarter’s name to attract a wider following, because fewer people are browsing crowdfunding sites for fun than there were a couple of years ago.

You bring your own audience with you, or you fall. The articles, the tweets, the shares… you might be lucky enough to get some traction, but you shouldn’t be banking on viral success. In that respect, I certainly wasn’t one of the lucky ones this time around.

Undad was a successful project, and raised a lot more than I thought it would. Its success is almost entirely due to a strong support network of friends and family. This qualifier is a double-edged sword, for while it speaks volumes about the generosity and enthusiasm of the people surrounding me, it also means that despite my best efforts, I have largely failed to engage a new audience with my work, an ongoing issue with my writing career that I have been struggling with for quite some time.

Still, Undad will be made and published, and added to my growing list of titles. And that can only be good news.